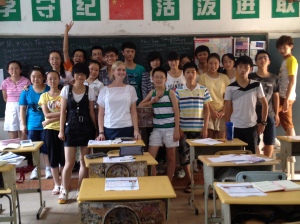 In March of 2012 – on my birthday, no less! – I received the exciting news that I had been accepted as a participating instructor in the Crane House Organization of Louisville’s 2012 Teach in Asia Program. I was placed in Jiujiang, China, Louisville’s sister city – “a small city of 850,000” that seemed far bigger – to teach conversational English in a three-week intensive program. Not only did I get to work with students (aged 13-16), but I also got to spend time in the classroom with some of the Jiujiang area English teachers. The three weeks I spent with the Jiujiang English School in July of 2013 was one of the most rewarding, challenging, and exceptional experiences I’ve ever had. 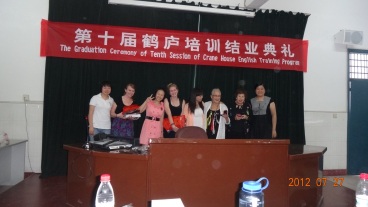 Laughing with some of the Jiujiang folks at the Graduation Ceremony,   July 2012.

I got a chance to teach with some extraordinary people in Jiujiang; our team of four was enthusiastic and collaborative, and we worked very hard to make sure we were helping our students get the most out of their time with us. Native English speakers are rare in Jiujiang, so it was imperative that we, as teachers, encourage our students to practice speaking their English, as they could read and write it superbly, but had little time to practice, even among themselves. We taught two three-hour courses a day, five days a week; our main objective was to get our students to speak English. Under an over-arching theme of lessons about Western culture, our students danced, sang, wrote and acted out plays (see a sample video of one below), and played games, all while getting in valuable practice time with a language they had long written, heard, and read but rarely spoke. The time we spent with the English teachers from local schools was a fantastic experience that spanned discussion of teaching methodology to current affairs, and it was lovely to form international bonds with our colleagues in China.

We collaborated closely with the Jiujiang area Education Bureau regarding our pedagogical methods and students. We had several wonderful mentors at the school, who not only assisted us with adapting to Chinese classrooms, but also showed us around their province, which was bordered by the Yangtze River and the Lushan mountain chain. The teachers and the students were also very excited for us to experience their culture and city, so the overall experience far exceeded my expectations; the warmth that the folks in Jiujiang showed us was lovely. My devotion to teaching grew in some fascinating directions after this experience, and I am glad to have made what I hope to be some lifelong friends in China. Now that I’m back at Jefferson Community & Technical College, the sister college to the Jiujiang Vocational College, I am working help both schools form a new academic bond that may include sending JCTC folks out to rural China in the future, and I will complete my TEFL certificate in the spring of 2013 prior to my graduation. I hope not to waste the good fortune I gained by teaching English in China, and I remain extraordinarily grateful to have had such a wonderful experience there. 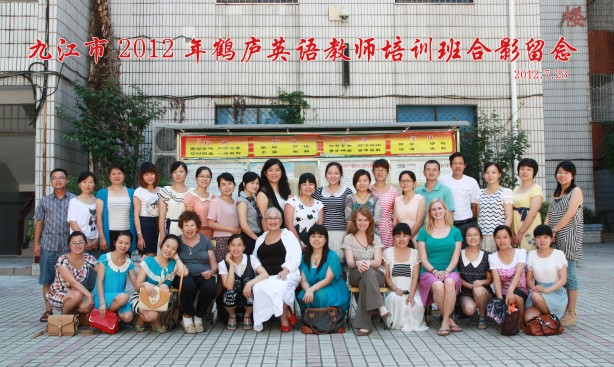 The Crane House teachers with the Jiujiang area teachers, July 2012.